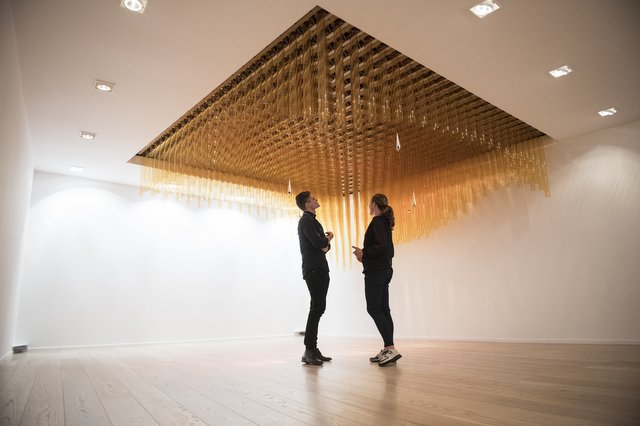 This artwork installation was a joint project of the Scandinavian Design Group and the oil company Lundin Norway and was presented for the first time at the Offshore Northern Seas (ONS) 2014 trade fair in Stavanger. The 529 acrylic tubes, individually driven, simulate the water surface and are mounted between two levels. The highly sophisticated sensor system detects the presence of every single person moving inside the structure. This has a direct effect on the movements of the installation. The large sensitive floor system SensFloor was integrated with four depth cameras into a real-time model of the environment on which the movement pattern is based.

“The success factor for a project like this lies in the ability to combine different areas of expertise at an early stage in order to get a comprehensive but detailed perspective on the whole project,” says Frida Larsson, Client Director and Project Manager for this project at Scandinavian Design Group. The installation can now be admired in the new offices of Lundin Norway.